Your Browser Is Incompatible

You are seeing this message because we have detected you are using Internet Explorer 10 (or older) to browse our site. Unfortunately, this means that your browser is too old to display our site properly and that certain areas of the site may display incorrectly or not at all. Please upgrade to the latest version of Google Chrome, Mozilla Firefox, Internet Explorer, Microsoft Edge, or Apple Safari in order to view this site.

We were out at McGee Park this last weekend, at the 23rd Annual SJC Home Improvement & Building Expo, and had a fun time seeing our old friends and meeting new ones!

END_OF_DOCUMENT_TOKEN_TO_BE_REPLACED

Coats For A Cause — Webelos Coat Drive 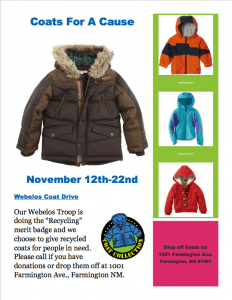 Robbins Heating & Air Conditioning is helping the Webelos Troop with completing the requirements for their “Recycling” merit badge.

We choose, in the spirit of the holiday season, to collect and donate gently used coats or new coats for people in need.

I “made bail” to support MDA!

In our efforts to raise money for the Muscular Dystrophy Association and make “bail”;  we raised a total of $720 dollars! to free Richard Williams!

Spending time in MDA Lock-Up has been a great experience — and very rewarding. We want to thank all of our supporters for helping secure our release from MDA Lock-Up. We especially want to thank:

… for their generous donations! We appreciate the event organizers, the other “in-mates”, and especially Officer Erikson for giving us a 1st class ride to the “jailhouse”.

A HUGE THANK YOU from the bottom of our hearts. 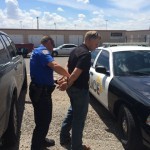 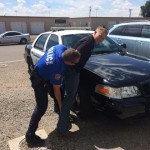 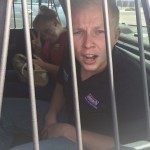 In the squad car for the ride … 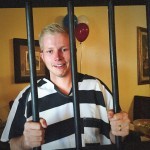 to jail and behind bars!

Tags: Donations, MDA, Muscular Dystrophy Association
Posted in Community Involvement, Uncategorized | Comments Off on I “made bail” to support MDA!

Thank you for your support at the 2015 San Juan County Fair! 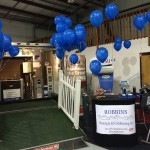 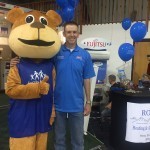 Steve and the Family First Bear! 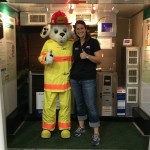 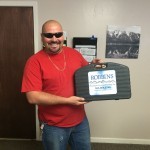 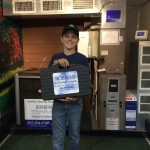 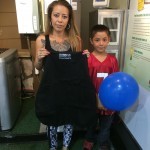 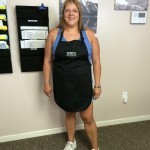 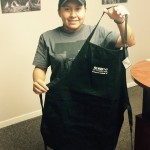 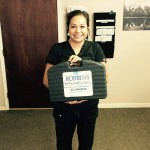 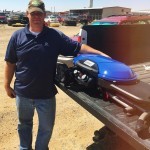 We were so impressed with the kids that came by. Most all of them said PLEASE and THANK YOU for their balloons without being asked. It was really heart-warming to see these great kids and their parents having so much fun.

We had so much fun choosing winners during the fair. There were many different types of folds on the drawing cards from people who were trying to get a winner’s edge. We had some good laughs enjoying their creativity!

We loved seeing the mascots of other companies who stopped by to take a rest by our air conditioner. We were glad to be able to help give them a breather during the fair. It does not hurt to have an air conditioning booth in the middle of summer! The best part was being able to inform and educate those with questions about their heating and cooling system. We talked with a few hundred people and were able to help some make decisions about what options might be best for them. Making decisions about the most used appliance in your house shouldn’t be taken lightly! We make every effort to give as much information as possible so our customers, friends, and family so you can make the best decision possible. It’s always nice to have a professional’s opinion.

We had so much fun this year; we will definitely be at the fair next year. We wouldn’t miss it for the world! See you at San Juan County Fair 2016! 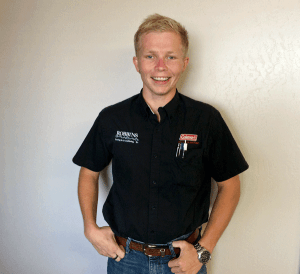 The critical dollars raised will support MDA‘s lifesaving mission to save and improve the lives of people fighting muscle disease. Together, we will:

I need your help!

Please support me in this important mission by making a tax-deductible donation. Your gift will speed MDA’s progress in muscle disease research and care, and make a difference to children and adults living with muscle disease right here in our community.

Thanks in advance for your help. Don’t hesitate to call or email me with questions or donate here: http://www2.mda.org/site/TR/Lock-up/General… 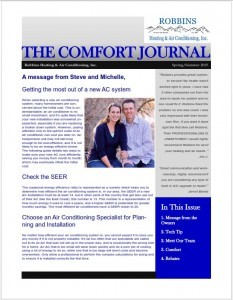 Want to know more about Robbins Heating & Air Conditioning?  Check out our newsletter “The Comfort Journal.”

In this Spring/Summer 2015 issue, you’ll find a message from the owners Steve and Michelle, along with our Service Tech Tip, Employee Spotlight, Home Comfort, Recipe and special offers! Click to view Spring Summer 2015 Newsletter.

CONGRATULATIONS! Our Raffle Winners from the Home Show!

Our Home Show has officially wrapped up. A HUGE thank you to everyone who helped make it a success. We enjoyed meeting new friends and talking with all of you at our booth. The best part was answering some great questions and discussing ideas. We loved giving free estimates and were able to give our BBQ grill and BBQ sets away! Congratulations Jeremy, Sarah, Jerry, Nancy, and Ruth on your new BBQ Sets! And John on your new BBQ grill!

See you all next year at the 22nd Annual Home Improvement & Building Expo sponsored by the San Juan County Home Builders Association! 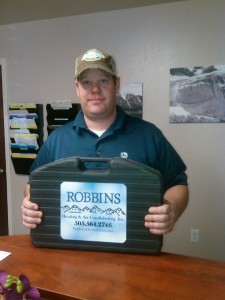 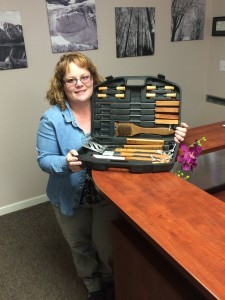 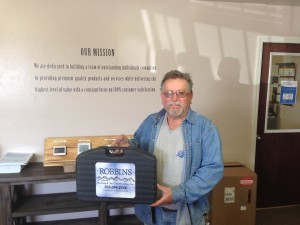 A House That Cleans Itself? “BUILDING YOUR DREAM” at the 21st Annual Home Improvement & Building Expo 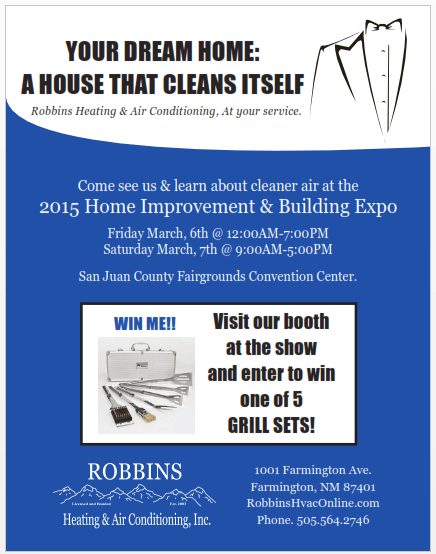 A house that cleans itself…a dream?  Some may consider it fantasy, but it is entirely possible! We are excited to take part in “BUILDING YOUR DREAM” at the 21st Annual Home Improvement & Building Expo sponsored by the San Juan County Home Builders Association.  Its happening March 6-7, 2015 at the McGee Park Convention Center.  We will be featuring ways we make clean homes a reality!

Breathing pollution inside?  According to EPA.gov, the air inside our homes, “…may be 2 to 5 times – and occasionally more than 100 times- higher…” more polluted than the outdoors.  We have the ability to not only filter the air inside but a lot more!  We can “scrub” the air using the Apco Whole-House Air Purifier killing over 99% of airborne mold, bacteria, viruses, and allergens.

Never dust your house again?  We offer Honeywell Electronic Air Cleaners that capture airborne particles and reduce the dirt floating through the house.  Who likes to dust anyway?! 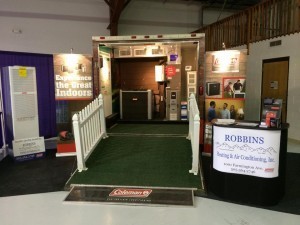 With the air in your home filtered, cleaned, and dust free you’ll have less down-time with sickness, less time spent doing chores, and more energy.  We haven’t found a product that will vacuum carpets or clean bathrooms, but we are investigating possible solutions as we speak!
Come see our booth at this years “BUILDING YOUR DREAM” Home Expo at the McGee Park Convention Center Friday March 6th 12:00 AM-7:00 PM & Saturday the 7th, 9:00 AM-5:00 PM. Learn more about turning your house into a home that cleans itself!

Many people may think of Valentine’s Day as a holiday essentially created by card and gift companies, but the truth is that the holiday has long-standing roots going back to the Roman Empire. The name “Lupercalia” has its origins in the word “lupus”, which means wolf, and the reason for this is that according to Roman pagan religion, the she-wolf Lupa nursed the two orphaned infants Romulus and Remus, the founders of Rome.

The Festival of Lupercalia spanned two days each February, from February 13th to 15th. The festival was about fertility and was led by Luperci priests, known as “brothers of the wolf”. The festival was serious with intention (fertility) but was executed as quite a romp for both the priests and citizens of Rome. The process was this: two male goats and a dog were sacrificed at the beginning of the festival by the priests; two young Luperci were then anointed with the blood from the animals, and the hides of the animals were cut into straps. As food and drink flowed, the male priests would run around the city wearing nothing but thongs made from the animal skins, and they also carried a strap from one of the sacrificed animals. The strap was used to strike the palms of Roman women waiting for the priests in the city, as it was believed that being hit with the strap could help with infertility issues and a safe, healthy labor for women who were pregnant.

The Transition to St. Valentine’s Day

The Christian influence of the holiday came around the 5th century. The Roman Empire was still strong, but Christianity was rapidly taking hold throughout the world. It is believed that to try and remove the paganism from the holiday, the deaths of two men, supposedly both named Valentine, were added into the mix. During the 3rd and 4th centuries, a law created by Claudius II forbade young men eligible for military service to marry, because Rome wanted a strong army. The two men named Valentine were priests, and married young couples in secret. Both were found out and executed on February 14th, although in separate years. The Church made Valentine a saint (they chose one), and Lupercalia became St. Valentine’s Day.

Here’s wishing you and your loved one a Happy Valentine’s Day!

Check Out Our Blog for the Latest in HVAC Technology

Be sure to bookmark the Robbins Heating & Air Conditioning, Inc. blog for updates on the latest advances in HVAC technology.

Tags: Air Conditioning, Heating, Indoor Air Quality
Posted in Uncategorized | Comments Off on Check Out Our Blog for the Latest in HVAC Technology